Johnsons Island Native people visited or inhabited the Island and area well before the Civil War.

This part of Ohio was home to the Iroquois and Algonquian speaking tribes and others.
The more recent Native people, most likely the Wyandot that were called “Huron” by the French and early settlers enjoyed the many resources on Johnsons Island In the Lake Erie Sandusky Bay region. The island is in Ottawa county and a few miles north of Erie county both local tribe names.  No wonder they came here in the spring , summer and fall months for the fishing, clamming, duck, geese and rabbit hunting, berry and nut harvesting and planting their crops.

The island was accessible from the south side of the Marblehead peninsula by about a 1/2 mile, the north side of Erie county less then 2 miles and from the Sandusky river and western Bay area by a short canoe ride.
Left behind on the island are some artifacts from the past cultures. Maybe the  Sandusky people from 1000 AD – 1650 AD, Woodland Indian’s from 800 BC – 1200 AD or older cultures!  Here are a few artifacts found:  a wonderful stone smoking pipe with four dots on each side.  Pipes and tobacco were generally used to worship the great spirt.  Also a pendant that’s broken where the two holes have been drilled.  A scraper with line designs running down one side.   Also, two smaller Arrowheads, the black one with white specks looks like it was used for fishing?
I’m not sure of the timeline or tribal origin of the artifacts I found on Johnson’s Island (called Bull Island before the Civil War) but beautiful reminders of the ancient people that shared the waters of Lake Erie.
Artifacts all found by Tom Vickers. 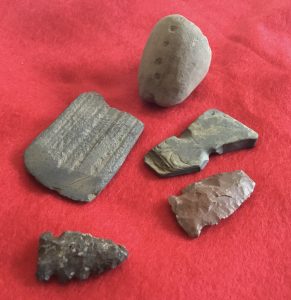 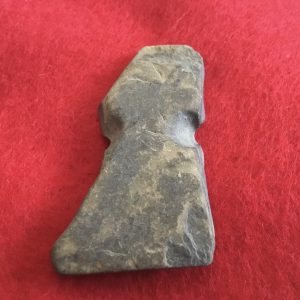 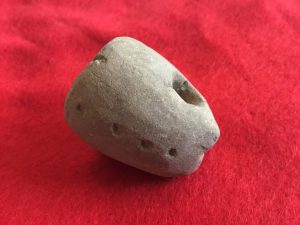 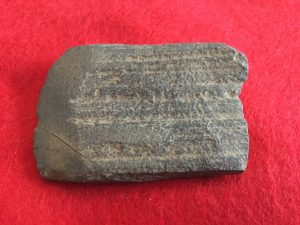 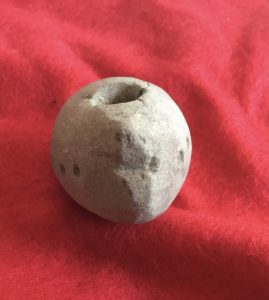